Chromium 6 in our water 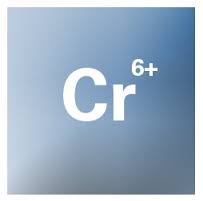 A recent study has found that two thirds of Americans are being exposed to high levels of a carcinogen known as chromium 6. This particular chemical made the headlines in 2000 when it stared alongside Julia Roberts in the movie "Erin Brokovich." Chromium is a naturally occurring element found in rocks, animals, plants, soil and volcanic dust and gases, according to the National Toxicology Program. It comes in several forms, including what is commonly called chromium-3, an essential nutrient for the body. Chromium-6, which is rare in nature, is produced by industrial processes. Chromium-6 is used in electroplating, stainless steel production, leather tanning, textile manufacturing and wood preservation, according to the National Toxicology Program (PDF). Chromium-6 is also found in the ash from coal-burning power plants and used to lower the temperature of water in the cooling towers of power plants.

Why is this such big news?

Even in small amounts, chromium-6 can cause skin burns, pneumonia, complications during childbirth and stomach cancer. EWG, a nonprofit research organization, analyzed Environmental Protection Agency data on more than 60,000 samples collected at water utilities in all 50 states between 2013 and 2015. They found chromium-6 at levels deemed unsafe by public health officials.

While everyone is worried about the election, the violence, and terrorism, we are drinking something that is known to kill us.

"Americans are exposed to dozens if not hundreds of other cancer-causing chemicals every day in their drinking water, their consumer products and their foods, and what the best science of the last decade tells us is that these chemicals acting in combination with each other can be more dangerous than exposure to a single chemical." -Bill Walker, co-author of the report and managing editor of the Environmental Working Group.

Bill Walker's quote may be the most important piece of information we absorb this year. We know chromium 6 causes cancer. We know that most Americans are exposed to above healthy levels daily from their tap water. We know where it comes from. It is unregulated.

Why is this not more important?

That question can be asked to many serious scenarios that currently plague our society. What is important now is to act as an individual on your own behalf. You can control the water that enters your home.You can drink healthy water. While we all want change and reform in our water systems, that takes time. It also takes people to stand up and say this in unacceptable. While this change slowly comes about, unfortunately at expense of American citizens health, your health is in your hands. Bill Walker referred to chromium 6 as just one of hundreds of cancer causing chemicals we are exposed to daily. Get a reverse osmosis system for your drinking water. Like it or not, we are all Flint now.