It is essential to know and understand the type of pollutants, chemicals, and biologicals found in everyday tap water. Identification is the first step in making it safer for drinking, bathing, cooking, and cleaning.

Chloramines are most commonly made when the chemical chlorine is mixed with ammonia creating an effective disinfectant. It is also known by the names monochloramine(NH2C1), dichloramine(NHC12), and trichloramine(NC13) which are the three different species of chloramines.

They are so closely chemically related that their cells can shift to form each other interchangeably. This means that any one of the different kinds can be present in tap water at varying levels.

Free chlorine may be capable of quickly shocking the water supply and is thought to be more effective against certain bacteria like E.Coli, however, it also disintegrates rapidly in water.

In the 1930’s municipal water systems began using chloramines as a secondary additive to chlorine to keep water sanitary for longer periods. Chloramine takes a lot longer to dissipate and keeps water from harboring bacteria and viruses as it travels through pipes on its way to homes and businesses.

It works with powerful amino acids in the bacteria’s DNA, penetrating the cell walls and stopping them from metabolizing. This makes it highly effective at tackling the outer protective shell of the unwanted particles leaving them open and vulnerable.

It is also seen as less harsh because it is less reactive with the organic matter in water which cuts back on the disinfectant byproducts produced. In short, it is currently seen as the most effective way to keep city water supplies clean and sanitized.

Although chemicals like chloramines are added in an attempt to stop the spread of disease and illness they can have adverse reactions when combined with water. 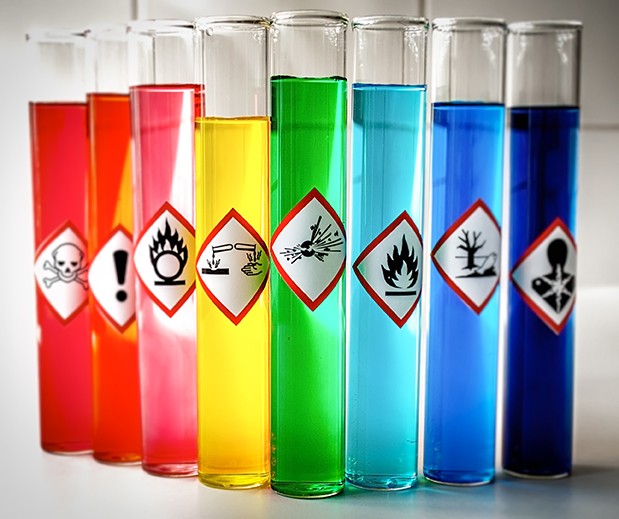 What type of byproducts will form when combined with organic water compounds depends on three factors. What kind of disinfectant is used, how much is added and the disinfectant residual. The temperature of the water can also speed up or slow down byproduct reproduction. The harmful effects can happen when water with a high concentration of byproducts is ingested or inhaled.

Even when not present as gas the byproducts created by chloramines can dehydrate and weaken the skin from the outside by attacking the cell’s protein structure. The harshness of the chemical leeches hydrogen atoms causing inflammation, discomfort, and in some cases even pain.

Some of the negative external side effects include...

Chloramines are even more dangerous when the heat of a bath or shower liberate chemicals, like chloroform, into the air as a gas. This makes them more likely to be breathed in and delivered directly to the bloodstream. Up to 80% of byproducts are thought to be transformed into gas as soon as they are released from a showerhead. This means that even a quick 10-minute shower can cause more damage than drinking several gallons a day.

Internal effects may include:

The good news is, there is a way to prevent the harmful effects of disinfectant byproducts while still keeping the cleansing effects of the chemical additives. Shower and home filtration systems have been developed to make water safer for everyday use. However, not every type of media filter can catch every unfavorable particle, so choosing the right type of clarification media is a must.

Activated Carbon: Can be made with natural materials like wood or coal or by more environmentally friendly means like coconut shells. The media is heated until charred and porous. As water is filtered through the pores it catches most impurities including chlorine, copper, lead, and many pesticides. It is also fairly durable making it the most commonly used media. However, it is not very effective against chloramines.

Catalytic Carbon: So far Catalytic Carbon is the most capable of removing chloramines from bath and shower water before the byproducts can be inhaled. Its unique ability to draw out more toxins and harmful particles leaves a purer water source to better hydrate skin and hair. This enhanced carbon is created by altering the structure of activated carbon through higher temperatures and gas processing to strengthen the surface..

Reverse Osmosis: Another excellent option when looking to remove chloramines and byproducts. This intense specialized process pushes out impurities in water like pyrogens, asbestos, metals, bacteria, as well as chloramines, and chlorine. However, the fine and delicate process requires distinctive hardware that is better reserved for kitchen filtration. A special under counter setup and faucet create the ideal water for cooking and drinking.

Kinetic Degradation Fluxion(KDF): Mixing media can also be highly effective in combating the negative effects of multiple chemical additives and their byproducts. Even though it cannot filter out chloramines, KDF is effective when working with high temperatures. It is a good option for most impurities as it utilizes tiny zinc and copper particles to trap unwanted iron, scale, algae, and hydrogen sulfide.

Knowledge is power, so finding out more about the possible chemicals and byproducts in the area water supply can help to decrease the risk of harmful side effects while providing a safer and more beneficial water source.